Recently, 4Chan users began a national campaign to “nuke the reputability of far left campuses and media”. To do so, an anonymous user on the forum based site recruited other users to place posters and flyers stating “it’s okay to be white” on local high school and college campuses, attempting to shed light on what he deems to be the anti-white bias in academia.
His plan was executed by an unknown number of trolls on Halloween night, with signs stating “it’s okay to be white” in aesthetically pleasing fonts appearing across the United States and Canada at universities such as Tulane, Harvard, and Alberta.
Essentially, it worked. Overnight, massive controversy arose over the signs, with some calling them “microregressions” and others going so far as to adress them as “hate crimes”. In Cambridge, where an individual placed 20 stickers on light posts near universities, the police are investigating the actions, though it is unclear what crime was committed by the anonymous activist.

Moreover, the campaign caught the attention of the Washington Post, Boston Globe, and an array of local news sites, all of whom reported on it in a negative light, thus succumbing to the objectives posessed by the members of the campaign. 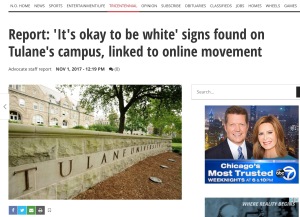 An administrator of one Maryland school went so far as to state the pro-white movement was “a concerted national campaign”, providing the assumption that thousands were involved in a campaign committed by those on the fringes of our society.
This is particularly troubling to the left, as it means those they deem bigoted who wouldn’t otherwise have a platform to speak their “abhorrent” views are given the opportunity to do so through reputable sources reporting their views.
In providing 4Chan users such a spotlight, academia and the mainstream media took the bait provided to them. In fact, the anonymous 4Chan user who posted the instructions stated  “, posters go up on campuses all over the world on Halloween night. Next morning, the media goes completely berserk.”
It was their intention to elicit a response from those with the power to distribute information in an effort to further their cause. This is because they feel that when the media reports poorly on a campaign centered around what they deem is “white equality” individuals will be converted to their white nationalist beliefs.
And on this front they are winning. For example, mere hundreds chose to show up to the “Unite The Right” rally, but because of media perception it was perceived to be a rally of thousands.
The same can be said about this recent campaign. They utilize the power of perception and know well that media groups will report on “hate crimes” to grow their viewership. Such reporting is fostering the bupartisan political animosity within the United States. One must be cautious in what they read so they don’t succumb to the notions of 4Chan that are indirectly perpetuated by the mainstream media. I am a reporter for 71 Republic.